If you think that the Billabong Pro, Tahiti is the only show in town than you have another thing coming. The Vans Pro, in Virginia Beach, is on right now. Surfer Michael Dunphy wowed the home crowd last year with his small wave attack and slack-jawed “who me?” expression. Will he repeat or will Matt Passaquindici topple the king? Tune in!

Also, the Sooruz Lacanau Pro, at Grande Plage, Lacanau France is running. Next heat features Andy Criere, Enzo Cavallini, Edouard Delpero and Luis Diaz Urrejola. Which one is on your fantasy team?

Speaking of fantasy teams, Scientology is also at the Sooruz Lacanau Pro but secretly. The Local, France’s news in English reported today that, “…the event’s organizers thought that it would be the perfect place to spread information about the dangers of drugs. Accordingly, the anti-drug association ‘Non à la drogue, oui à la vie’ (No to drugs, yes to life) was granted permission to set up a stall at the event, where members would hand out notices to people about narcotics and get them to sign petitions.

However, two days into the competition, which runs from August 13th to 23rd, the organizers noticed that the stall was not all that it seemed. After being alerted to some of the conversations taking place at the stall, the organizers reportedly realized that the association was in fact financed by the Church of Scientology.

‘They were converting. We were fooled, misled,’ a spokesperson for the surfing competition was quoted as saying by Le Parisien.”

Scientology is considered a sect in France, thus not afforded the traditional liberte, egalite, fraternite, and the offending zealots were forcibly removed from the event. Who do you think they were after though? Do you think they wanted Nanook Ballerin to swing on over to the L. Ron side? Do you think they hoped for a true star like Michael Dunphy and his open-mouthed “huh?” appeal? I would have to think that Michael Dunphy would grow into the Tom Cruise of professional surfing in Scientology’s hands. An unstoppable juggernaut.

…where John John loses, but only just, as Gabriel rigs his sails, finally!

World title defences are, for the most, subdued and Gabriel Medina, currently wearing a shame face in fifteenth, is nothing if not conformist.

What we’ve forgotten in the furious gale of Toledo-fever is that Gabriel has a weird witchcraft. This ability to look like he’s sleep-walking and…yet… grab his competitors by the throat and fling their carcass out of an event. It’s incomprehensible and awful to some, genius to others.

Did you watch his round three with John John? As uncanny as John John’s tube riding is, as much as his post-barrel turns take your breath away, as much as he collects nines on every ride, he couldn’t beat the stubborn world champ. John was lost in astonishment.

And do you remember last year? When Gabriel beat Kelly Slater who was in the form of his life, in the best waves surfed at a Teahupoo contest?

A little prediction. Gabriel will wash the year away with a win, maybe two (France, Portugal), finish top four and return, enthusiastic and fabulous, for title two in 2016.

In the meantime, Aritz Aranburu thrashed Mick Faning, Italo Ferriera, who could talk the hind-legs off his favourite dog in the post-heat interviews, found ramps and Filipe ended Brett Simpson’s fanciful dream of a ninth or better.

In a move rocking the publishing world, Surfer Magazine admits (basically) that it has run out of ideas.

8ish short months ago, Surfer Magazine took a cover concept from the defunct, but brilliant, Transworld Surf. It featured John John Florence with the words “Watch the Throne” written bold. As stated on this very website, the unattributed “borrowing” was, “Not a long enough time ago for Surfer’s issue to be homage. Not a short enough time ago to be ‘we thought of it first just printed late.’ Just the right amount of time ago to be uh oh!” (read whole story here!)

And they have done it again. Transworld‘s first cover under its brilliant, yet enigmatic, creative director Sam Allen, showed a young African boy bodyboarding a wave whilst sticking out his tongue in black and white. It was as bold as it was perfect and I asked Mr. Allen about it one day. How in the world did the magazine agree to such different cover? He told me that he had to swap everything out under cover of darkness and sneak it in. Have you ever heard of such a thing at a major publication? His instincts were, of course, right and today that cover is lauded as one of the best of all time.

Though it is very well known, Surfer apparently has no moral objection to borrowing the concept for their latest cover and feature the same boy (maybe) with his friends standing in the waves and smiling. In black and white.

Sources have confirmed that the Surfer staff is thinking about re-naming their website PeachGrit. We will, of course, keep you up to date.

I like to read, and if you enjoy BeachGrit, which is more than a little text heavy, I can only assume you do too. Here’s a list of a few of my favorite books. Good books, to be sure, but not heavy reading by any means. Reading should be fun, provide escapism, make you laugh.

There’s a place for seriousness, but we don’t all have the fortitude to slog our way through Joyce, or try to understand what the fuck Pynchon is talking about, or deal with the wrist-slitting depression Bukoswki brings to the table. 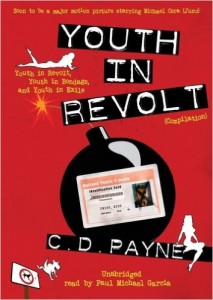 You’ve probably read Dune, it’s one of the most famous and critically acclaimed scifi novels ever written. Herbert manages to tell an exciting tale of space wars, knife fights and giant sand worms, all wrapped up in an allegory about the danger humanity faces every time they lift someone to the status of “hero.”

The first book in the series is the easiest to swallow, as it progresses it wanders into philosophically strange territory. I love them all, but the later installments aren’t for everyone. But Dune... anyone who says they don’t love it is a filthy liar.

Robin Hobb is the second nom de plume of Margaret Astrid Lindholm Ogden, one of the most hyper-prolific and soul crushing talented writers in the world.  Each year she drops a new book, each year it is absolutely superb.  Assassin’s Apprentice is the first instalment in her Realm of the Elderlings series, which currently numbers fifteen novels. It’ll suck you in and leave you crying and she manages to make you love her characters, then subjects them to utter anguish.

#4 Tapping the Source by Kem Nunn

Set in a pre-gentrification Huntington Beach, Tapping the Source follows Ike Tucker, a desert rat turned surfer in an attempt to find who is responsible for his sisters death. It doesn’t wax poetic about ersatz soul, it portrays surfers as they generally are, self-involved hedonistic scumbags.  Violent, cruel, graphic. It is, in my opinion, Nunn’s finest work.

#5 Can’t You Get Along With Anyone by Allan Weisbecker

Like most, I was a huge fan of In Search Of Captain Zero. Great story, especially if you take the author at his word and assume it’s all true. Which it, of course, isn’t. Writers are, by nature, professional liars and you shouldn’t trust a word they say.

I’ve got a longstanding personal beef with Weisbecker, and by all indications I’m one of many.  CYGAWA is, ostensibly, a memoir, but is in reality a pile of self-indulgent garbage penned by a misanthropic prick with little to no personal insight.

The following Amazon review does a good job of explaining the situation:

My biggest beef, I suppose, is this: Weisbecker makes a big deal–A REALLY BIG DEAL–about the ins and outs of good writing. Talks a lot about building suspense, carrying the reader along, giving the reader a pay-off at the end. He talks about his obligation to the reader. And yet, when it comes to executing those very things he preaches (in a manner so pompous I can only assume his picture is used to illustrate the entry for “blowhard” in Wikipedia), he completely drops the ball.

About half way through I got sick of his mewling self-pity. About three quarters of the way through I decided to stop reading. At the end, with him curled in a ball, unable to confront his toxic, two-timing lover, I all but threw the book across the room shouting “That’s it? That’s it, you complete pussy?”

It is a gruesome business, this hacking away at heats in waves that look like ashtrays, just to whittle it all down to a workable dozen or so. When might sanity prevail, when might sentimentality be thrown out the door, so the surf fan might be spared the long and mentally costly grind of rounds one, two and three?

A two-day contest would instantly turn a shabby, cross-your-fingers event into something extravagant and representative of surfing. You can’t count on a friendly shark at every surf event to stir up the internet.

If the business of the WSL is to sell the game to the fabled football fan, too dumb mostly to care what appears on his television screen, what might he make of thirty-minutes of Bede Durbidge and Glenn Hall, scrubbing for fives, in rain-soaked inconsistent waves?

But for the surf fan, for you and me, even on these bleak days, though not, let it be said, as bleak as yesterday, not as threadbare and despairing, there are highlights to be found among the long hours staring at a computer screen, eyeballs drained of essential moisture.

Brett Simpson won a heat? And he beat Taj Burrow? And he beat him well? For Brett it was like a man bursting out of a loveless marriage and straight into glorious infidelity!

CJ Hobgood, an excellent craftsman if there ever was one, has been disregarded by everyone including and has announced his retirement from the tour. Would he drift off the scene, crumbling, plucked?

Today new eyes grew in a new head. A nine and a bit! He sent Nat Young straight back to Santa Cruz in last!

“I could not be more astonished than if you told me the Turin Shroud was a fake,” gasped CJ.

I also enjoyed Adam Melling wrestling a foam ball at one point in his heat against Ace Buchan, though he eventually lost. Kolohe Andino, outstandingly brilliant at everything it seems except surfing heats, scored less than five against Wiggolly Dantas. Perhaps he can raise poultry with his millions.

Watch it all here, condensed form.