What do you think World Surf League CEO Paul Speaker dreams about? Do you think visions of perfectly executed layback snaps dance across his cortex? Do you think his inner expanse is filled crisp 10.00 barrel to air combos?

I will say no! CEO Speaker does not know a layback from a daybed. The man doesn’t surf! What he really dreams of is a time when his beloved National Football League combines with surfing to form a Great Jock Majority.

And guess what? CEO Speaker’s dream is about to come true! The Washington Redskins, an NFL team known as much for quarterback missteps as a racist name, is building a new stadium and that stadium is going to have surfing as part of it. Let’s read: 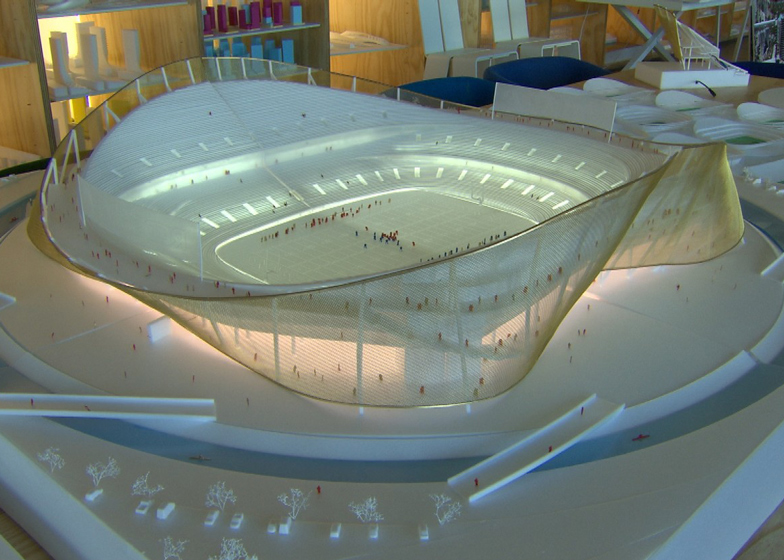 Although a location for the new Redskins stadium complex has not been chosen, BIG has already developed a design, which was unveiled on US television show 60 Minutes yesterday.

A scale model of the proposal shows a bowl-shaped stadium with a wavy outer wall, surrounded by a moat crossed by angular bridges. BIG has also revealed a rendering showing surfers, rollerbladers, kayakers and abseilers.

According to Ingels, the “very practical” design is intended to cater to a wide spectrum of activities before and after football games.

Have you always wanted to be rich? Stay away from surf co shares says Australian newspaper.

It was in the middle of last year, and I might’ve been under the spell of share traders and even a little high when I wrote it, that I advised BeachGrit readers to buy Billabong shares, now.

What was once a $A16 stock was selling for around sixty-cents. My rationale was this:

“Billabong have halved the number of retail stores and sold off a few of their biz’s, reducing debt, but, tellingly, a couple of hard-nosed US private-equity companies have bought hard into Billabong. And the CEO is Neil Fiske, who was instrumental in driving the fortunes of the king of US retail Les Wexner, turning Victoria’s Secret and A & F into the dirtiest of money spinners. On the creative side, Billabong has hired Roxy’s head designer to help drive Billabong gals, RVCA is starting to soar and Tiger Lily is still an unfulfilled buy.”

If you were to type “Billabong Share Price” into your browser today you might be astonished to learn they’re now a bullish buck-fifty. It ain’t quite so simple. A shareholder vote last November approved the consolidation of shares at the rate of one for every five owned.

Which means they should be worth three bucks, yeah? Ah, a little under a buck and and half.

Oowee, sure do hope you didn’t listen to your financially illiterate pal DR.

Anyway, The Sydney Morning Herald isn’t quite so taken by surf company stocks. In his piece, SurfStitch and the less than swell history of surfing stocks (don’t you love how a newspaper is incapable of running a story about surfing without a flotilla of puns?), John McDuling writes:

“Australians love their surfing. But Australian investors have an uneasy relationship with surf-related stocks. Sure, shares in ASX-listed SurfStitch were up sharply on Thursday after its chief executive resigned and said he was in discussions with buyout firms to take the firm private. But there is quite a bit more to this story.

“In November, with its shares up strongly since the float, the company raised $50 million for growth by selling shares to institutions at $2. The stock has traded lower ever since, but took a huge hit in the past month after the company backed away from its earnings guidance, saying it wanted flexibility to invest more in content. At the time, Morgan Stanley, which is positive on the stock, said ‘dropping guidance is rarely a good sign, particularly when it occurs three months after raising equity.

“If dropping guidance is not a good sign, then a subsequent resignation and looming bid by the CEO, when the stock is well below the level at which it recently raised equity is . . . interesting.”

Let’s read about Billabong and Quiksilver.

“By the early 2000s it was generating $US1 billion in annual revenue, but a string of disastrous acquisitions brought it crashing back to earth, and last year it filed for bankruptcy, after losing $US309 million. Is there something about the mentality of Australian surfing entrepreneurs that makes them poorly suited to the stockmarket? I don’t have a good answer to that, but it does seem that it’s a good idea to steer clear of surf stocks if you want to avoid a wipeout.”

Who needs a financial wipeout? Or a portfolio nose-dive? Or a choppy financial outlook?

Do you recall feeling mystified upon viewing Ryan Burch’s section in Psychic Migrations? The one where he surfs in cursive on a self shaped fish at a Chilean Point break?

Did you, like me, vow to owe one of his fiberglass masterpieces? Well now you can!

Until just recently, Ryan Burch, the shaper, has been reclusive to average surfers. Despite the constant begging of those who frequent Cardiff, Swamis and other San Diego reefs, the freesurfing professional would graciously reply that he only shapes for himself and for friends – who just so happen to be some of the smoothest cats on two keels. Lucas Dirkse, Bryce Young and Derek Disney are some of the blessed few who, until now, have been able to get Ryan Burch out of the water and into the shaping room.

Now he hasn’t opened the floodgates for board orders out of being snobby or lazy, because he is neither.Ryan is business savvy and knows that limiting his output drives the hunger for one of his boards. “

When I went into the business of making surfboards,  I realized that the demand drives the price up,” says Burch. “But I want to be able to make boards for people and do them myself and make sure that I’m making something that I can be proud of rather than giving the designs to someone else to produce them for me. My favorite part about shaping is using my hands to build them myself and I don’t want to sacrifice that. The bummer is because I’m doing it that way, I have to turn people down. I just really want to be able to shape and get some boards out there slowly but surely.”

But if you want an asymmetrical, a glider or one of his now-famous fishes, they are going to set your melt your plastic. The last time Ryan did a run of boards for Hansen Surf shop, the small window of opportunity to own a Burch original was reflected in the price tag- $1,500 a piece.

Steep, yes, but worth it? Probably. That is, if you value being unique.

Oh and now you can bypass the rack altogether and order a custom, but not in person, Ryan is far too shy for that. Hit his website.

I’ll bid ado with a question.

Do you want to be the guy paddling out to your local point on the CI Flyer that everyone has, or do you want to be the straddling the board that has every hipster in the lineup feeling envy? Do you want to fumble through a foam climb on a generic pop-out or express your panache with every cutback on a hand-shaped masterpiece?

Would you shell out 1,500 bucks to know the difference?

I finally get him and not in a homoerotic way!

It is a near spring day like any other in Los Angeles, California. Clouds speckle the warm enough sky. Cars drive down the streets going places. I check my phone. There is some fun news. The New York Times has a story on how Donald J. Trump cajoled his way into the Republican Party. He wanted to be accepted and so he spent a lot of money and was accepted. I post a picture on Instagram. Then I log on to the World Surf League and watch Kolohe Andino defeat Matt Banting and then I fall in love with an older brunette.

I remember when Joel Parkinson first came on to the professional surf scene. I am that old. He was a Coolie Kid, part of an exciting new Australian movement and even though I wasn’t Australian I liked what they represented though their spice soon wore off. I found the blonde one extremely boring. He called me a “fucking Jew.” I found the brunette very much more handsome but equally dull.

“How could people enjoy Joel Parkinson’s surfing?” I wondered to myself. And also out loud. “It’s smooth, whatever that means, but…what does that mean?” I didn’t really understand.

But today as I watch him surf ok on fairly fun Snapper and everything clicks into place. I totally get it. Every muscle of his body is perfectly aligned. Every sinew dropping, driving, spraying, reloading. His rail does not slide unless he wants it too. His arcs are clean. Consistent. He surfs absolutely beautifully.

Why didn’t I see this before? As a younger man I suppose my head was only turned by air and by power. As an older man my head is turned by grace.

Unscrupulous low level media online outlets are speculating wildly, the mainstream men keeping lips tightly buttoned, lest they offend. And the fans wait with bated breathe, wondering, “What shall be?”

A tour without Kerr would be a mundane attack on our hearts and minds, a terrifying descent into sporting legitimacy that would lay waste to our proud tradition of free spirited blood stream alteration.

Unscrupulous low-level media online outlets are speculating wildly, the mainstream men keeping lips tightly buttoned, lest they offend. And the fans wait with bated breathe, wondering, “What shall be?”

Are we witnessing the end of a icon?

Will the WSL’s wrath fall with the fury of mighty Mjölnir?

Why the radio silence? Is it indicative of corruption, a behind the scenes campaign to temper the Brazilian storm with the power of intravenous infusions?

I reached out to Dave Prodan, WSL VP of Communications, to find out more. His response? Shocking revelations, sure to change the course of the world.

With regards to Josh Kerr’s treatment on the Gold Coast, a TUE was approved in accordance with the WSL Anti-Doping Policy and WADA International Standards. The certified medical staff on site were authorized to administer the treatment in those circumstances.

Just in: Surfing and the NFL to combine!

The day I fell in love with Joel Parkinson!