But there, can you taste it? Feel it? The unique thrill only running and gunning for Olympic glory can bring? I’ll tell you what, country-on-country action has been known to drive even the least-athletic person into paroxysms of pasión and it will be no different when surfers paddle out in Japanese waters, competing for the first time in history.

Right on schedule, the International Surfing Association has released its thrilling format.

In Round 1, there will five heats of four athletes – the top 2 in each heat will advance through to Round 3, i.e., ten surfers.

Round 2 is a repechage round and will have two heats of five surfers.

The top 3 will move to Round 3; the two bottom finishers in each heat will be out of the competition.

There will 15 male and female WSL or WSL-adjacent competitors who will be seeded, partially, based on their 2019 season ending position. The other factors that will play in remain mysterious. 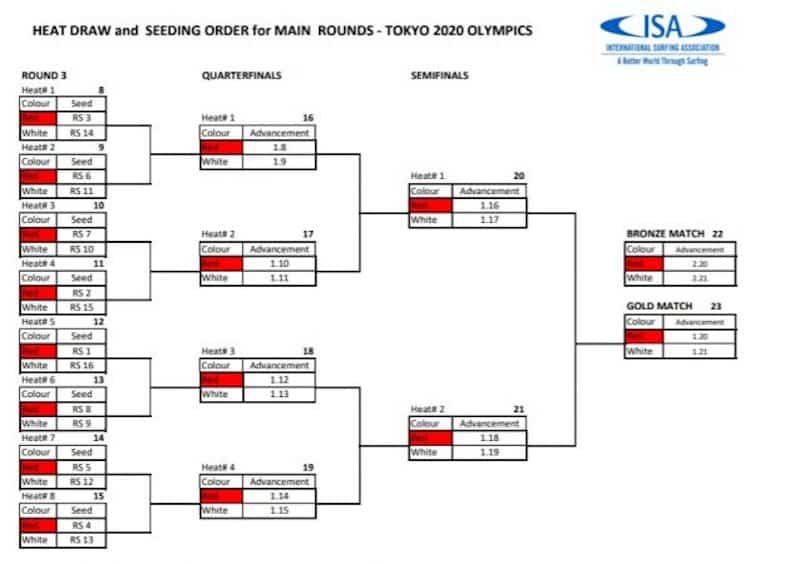 We should all go in together, make some monster bet and get on the news.

Trucks pulling up every fifteen minutes with crates of comatose turtles.

A touch of the wise old stoner about them.

Have you ever seen a surfer and a turtle settling matters in the parking lot? Turtles just don’t have time for that kind of toxic belligerence.

Turn around, glide away.

Not even a single registered complaint from them about the deafening cacophony of noise pollution we surfers bring directly into their living rooms.

Too bad for turtles that nature doesn’t give a jellyfish’s pickled dick about chill. Nature’s a bit like politics in that way; whether you like it or not you’re part of it, even if you don’t know you are.

Take events happening right now over in Texas for example, where temperatures have fallen to as low as 4C (40F). Nothing a decent five mm and a twat cap can’t handle you might say, but a) turtles are cold-blooded and thus more susceptible to changes in sea temperature, and b) Nobody’s designed any wetsuits for turtles yet.

As a result an unusual amount of ‘cold-stunned’ turtles – a process which more or less amounts to turtles going into a chill-induced stand-by mode – are being discovered along the Gulf coast.

According to this NPR story, Sea Turtle Inc., a charity in South Padre Island, near the Mexican border, has so far received more than 4,500 cold-stunned turtles, delivered to them by well-meaning Texans.

The stricken turtles are currently being housed through a combined effort between the charity, the South Padre Island Convention and Visitors Bureau, local government, and SpaceX, which happens to have a launch site nearby.

(You know if he just gave a fraction of his wealth…)

From The Guardian, “Every 15 minutes or less there’s another truck or SUV that pulls up,” said Ed Caum, executive director of the South Padre Island Convention and Visitors Bureau. “We had trailers full yesterday coming in that had 80, 100, 50,” he said.

To get an impression of what a warehouse full of hyperthermic turtles looks like, check out the video.

The centre’s waiting for temperatures to rise to 15C (60F) before evicting the turtles back into the wider world to earn their own living.

This is Texas after all, if you love hand-outs so much why don’t you swim to Cuba?

Above is a look at Reny Yater’s old Santa Barbara Surf Shop (now under a new moniker but still featuring a nod to bygone opportunities to capitalize, a la the Billabong Pipeline Masters in Memory of Andy Irons and featuring Gerry Lopez presented by Monster Energy) in that old quonset hut where State Street meets the beach in view of Sandspit.

A generationally iconic shop, in an iconic location, featuring an iconic roster of Rincon-centric shapers and riders over the years. Even as the blades of local rippers underfoot went from Yaters, et alius, to Merricks, the place carried weight and cache. I recall them expanding to a more” pan-outdoors” approach in recent years, with more surf gear racks replaced by kayak accessories and the hottest latest metal water carrying devices upon which to affix microbrewery and “save the ___” stickers.

Now though, according to a wonderfully penned new story, they are seemingly and thoroughly saved from the long-standing economic doom ushered in by the ’08 global massacre, ALL THANKS TO VALS! Even a rad quote, more or less saying how the beginner who comes in for his first boogie board today will be swinging thru in subsequent years for his booties and step-up sled.

What maketh the surf community of this? SalVALtion?

Mostly on whether to get the kayak accessory, the metal water jar, or my 1st boogie board.

Standing up for what's right.

There is no surf news today, many apologies, but a star German beach volleyball duo, comprised of Karla Borger and Julia Sude, is reportedly boycotting a tournament in Qatar because the country bans playing in bikinis.

“We are there to do our job, but are being prevented from wearing our work clothes,” Borger told radio station Deutschlandfunk. “This is really the only country and the only tournament where a government tells us how to do our job — we are criticising that.”

Qatar is hosting the March-slated FIVB World Tour for the first time after seven years of hosting a men’s competition. The female players have been asked to wear shirts and long trousers rather than bikinis.

The world beach volleyball federation FIVB supports the rule “out of respect for the culture and traditions of the host country”.

Borger disagreed, saying that they would normally be happy to “adapt to any country,” but that the extreme heat in Doha meant that bikinis were necessary.

What would the World Surf League do? Roll over like the Federation International Volleyball or stand up for bikini rights?

Qatar is attempting to host the 2032 Olympics and if surfing is still included we may get to find out.

"A white dude getting credit for a thing that already exists…"

The world sure do love a bitchy critic. Personal favs, AA Gill and Rex Reed, the former doing over restaurants, the latter, film.

Describing the shrimp-and-foie-gras dumplings at a very well regarded NY restaurant, Gill wrote, “What if we called them fishy liver-filled condoms? They were properly vile, with a savor that lingered like a lovelorn drunk and tasted as if your mouth had been used as the swab bin in an animal hospital.”

The New York Times’ Culture and Styles reporter and Menswear critic Guy Trebay, is cut from a similar if cheaper cloth. Anna Wintour’s face is “vulpine”; describing Lady Gaga’ style, she has barged “right past imitation to outright larceny.”

One man who didn’t feel Trebay’s claws in a recent review of his clothing label Stan (jackets $1500 etc) is the surfer and model Tristan Detwiler.

In the story, Men’s Wear Is on a Quilt Trip, Trebay describes Detwiler as “a handsome surfer with apostle’s locks, a silver thumb ring and a palm tree tattoo on his hand” and Detwiler’s hand-made clothes, fashioned from old quilts, as something reminiscent of the great designers, Raf Simons, Ralph Lauren, Junya Watanabe etc.

A glowing endorsement while skewering other new designers.

“(Stan) was a standout in a day of disappointing designer efforts: stuff like the skirts, skorts and knit tunics from Chelsea Grays, garments so laborious tattered they looked like the aftermath of a moth banquet; or Carter Altman’s Carter Young men’s wear staples organized around some sadly hoary signifiers of a nostalgia-steeped New York; or Aaron Potts’s APotts collection of clothes so intentionally without reference to secondary sexual characteristics they made you itch for a Cardi B video; or ONYRMRK, a new Los Angeles label designed by Mark Kim and Rwang Pam, whose layered plaid puffer parkas (try it three times fast) underscored fashion’s growing westward drift.”

Detwiler self-describes as “an artist and storyteller. That’s what I believe in. Fashion is the easiest way to tell my story.”

Now, social media has hit back with accusations of sexism and white male privilege.

In December, NYT reported that sewing was “back” because men were publicly participating, calling it a “long-neglected home art”, though home sewing’s popularity has on the rise for years, mostly led by women. Why does it take men, especially “handsome” ones with “apostle’s locks”, to validate it?
⠀⠀⠀⠀⠀⠀⠀⠀⠀
Stan is hardly the first line to make clothing from discarded quilts. In fact, the overall look begs comparison to the female-founded label @bode, launched by Emily Adams Bode in 2016. Her early one-offs caught the industry’s attention for their unusual level of refinement so often lacking in upcycled clothes. She also presented a new level of cohesion and narrative, building a world with pieces picked from the flea markets and even linen closets of her own childhood. ⠀

Even the Times’ own readers took issue with the piece.

“Something feels amiss in this article, with the unnecessary disparaging comments on other young & new designers (many of named being a combination of woman & poc) in order to positively highlight another designer… who is noted in the article to not be doing anything of particular uniqueness… and who happens to be a white male of generic attractiveness… The writer mentions Emily Bode’s designs with admiration, but anything short of those praises would be insulting as Detwiler’s designs share more than a passing similarity to Bode’s who is also a new designer with a couple extra years under her belt. The doppelgänger effect between the two’s work is so striking it makes me wonder why this even article exists. Why praise him, and through what lens is the writer looking through that makes him do prepared to tear down those other designers to support this nonsense?”

One, being a ravishing surfer with a apostle locks gets you a long way in the fashion world and, two, is there not an endeavour, an art, that hasn’t been gang-raped, mercilessly violated, by white male privilege?

International Surfing Assoc. releases thrilling format ahead of Tokyo Olympiad: "Non-elimination heats are the true mark of any evolved sport!"

Unprecedented freeze in US puts thousands of Texan turtles into “cold-stunned” comas!

Star German beach volleyball duo boycott tournament in Qatar over country's bikini ban: "We are there to do our job, but are being prevented from wearing our work clothes!"