What a day for the rumor mill. While you are certainly continuing to digest today’s scintillating whisper that International Surfing Association head Fernando Aguerre is pressing his advantage, attempting to break the World Surf League’s grasp on power by forcing Olympic-bound WSL surfer to march in El Salvador whilst waving flags, a new hot bit of gossip floats.

Where Aguerre remains unbent, it is alleged that the WSL is considering either dropping the just-announced Corona Open Mexico presented by Quiksilver that had been slated to run July 5 – 15, or shifting it to some other position on the calendar. The Jeep Surf Ranch Pro, scheduled for June 25 – 27, is, likewise potentially moving two weeks earlier.

Well, the Olympics is locked in from July 23 to August 8 and so much surfing, so little time. With Aguerre holding firm on his World Surfing Games dates (May 29 to June 6), it would mean those Olympic-bound WSL surfers would be flying willy nilly all over the globe in the time of Covid with scarcely any time to quarantine, much less train.

A giant mess or extremely fun?

Kelly Slater, meanwhile, is busily fiddling with his doctor’s note.

A virtual lock for the Olympics, no?

The World Surf League, née Association of Surfing Professionals, has long been the only governing body the average surf fan cares about or pays attention to. It lays claim to the world’s best surfers, the world’s best waves, and while that notion has been challenged in recent years with the advent of Kelly Slater’s Surf Ranch and contests there, it remains true that no great competitive professional surfer surfs off the WSL.

Well, for many years the International Surfing Association has worked in the shadows, building a vast network of countries (109 and counting), their national sporting dollars, hosting “World Surfing Games” etc.

The ISA’s chief, and onetime Reef sandal founder/owner Fernando Aguerre, has been a tireless champion for its mission, to “make a better world through surfing (2 ft beachbreak closeouts),” which culminated in surfing’s being accepted into the Olympic Games, the ISA its official governing body ahead of Tokyo.

Covid, of course, threw (or through depending on dialect) a wrench into the Olympic works but it is all officially back on and months away.

Before Olympic surfing, though, comes the World Surf Games in El Salvador, and here Aguerre sees his moment to wrest more, maybe all, power from the World Surf League.

In a sizzling rumor, it is whispered that the man well-known for colorful suits and playful cultural appropriation, is forcing WSL surfers who have qualified for the Olympics to attend the opening ceremonies, to surf their heats, then attend the closing ceremonies.

Ten-ish full days in El Salvador right in the midst of the WSL’s season.

The World Surfing Games are set to run from May 29th to June 6th. The World Surf League’s Rip Curl Rottnest Search is set to run May 16th to May 26th. If it goes the full window, Olympic-bound WSL surfers will have but days to cross the globe, quarantine in El Salvador, march and wave to adoring fans, surf, march and wave to adoring fans, fly home, quarantine, train, fly to Tokyo, quarantine, train.

The Olympic-bound WSL surfers are, allegedly, furious but Aguerre is unbent. This is his moment to break the World Surf League’s hold and he will not succumb to any pressure campaign.

First alternate on the U.S. team Kelly Slater, it is rumored, has received a doctor’s note that will allow him to miss the World Surfing Games yet attend the Olympics.

Dang trick foot injury that only allows him to surf pristine barrels.

With the WSL in reported financial straits, will this be it? Will owner and co-Waterperson of the Year Dirk Ziff hand surfing’s reigns to Aguerre and say, “Good riddance…”?

If there is one place on earth where peace and love are guaranteed to reign, overcoming all odds, never fading, it is Australia’s Byron Bay. The quiet town of under 10k some 500 miles north of Sydney, 100 miles south of Brisbane, is an absolute dream with an organic açaí bowl in every stomach, a just-finished yoga session tingling on every limb.

The Coast of Utopia.

But horror of all horrors, the unthinkable might be happening as growing animosity between leashless and leashed longboarders threatens to break the community apart.

THANKS FOR HELPING HER ONTO THE BEACH THEN LEAVING HER THERE WHILE YOU JUST PADDLED OUT TO  DO THE SAME TO SOMEONE ELSE… I KNOW EXACTLY WHO YOU ARE BECAUSE I SAW YOU OUT THERE… IF I SEE YOU IN THE WATER TOMORROW ARVO YOU ARE GOING TO HAVE A REALLY SHITTY TIME.

WHAT IS WRONG WITH YOU DICKHEADS WHO THINK ITS COOL TO SURF WITHOUT A LEG ROPE!

YOUR ENDANGERING EVERYONE ELSE IN THE WATER BECAUSE YOU THINK YOU LOOK HALF COOL. YOU DON’T YOU ARROGANT PRICKS.

SOMEONE WILL GET KILLED SOON FROM THIS BULLSHIT RECKLESS BEHAVIOUR.

At time of writing, over 100 concerned citizens and citizen-adjacents have weighed in. There appears to be very little support for the fucking wanker on a leashless green longboard.

But does he have the silent majority in his corner?

Fanning will join the likes of Jodie Cooper (Class of ’20), Mark Richards (Class of ’85) and Wayne “Rabbit” Bartholomew (Class of ’87) and beat stablemate Joel Parkinson to the high honor.

He won three Association of Surfing Professionals World Championships (2007, 2009, 2013). Unfortunately, I can only recall two taglines: “Micktory” and “lighting strikes twice” but I think “Micktory” was actually his second 2009 tagline so was it “lightning strikes thrice?”

What was the first one called?

While you’re thinking, the great Nick Carroll, Australian Surfing Awards’ curator, said, “Public or private, there’s the sense that Mick Fanning, despite his renowned game face and rock-hard attitude in competition, is an open book. What you see is what you get, and that might be a quality Australians love in a person more than anything.”

You can see here (as modeled by surf journalist Tim Baker). 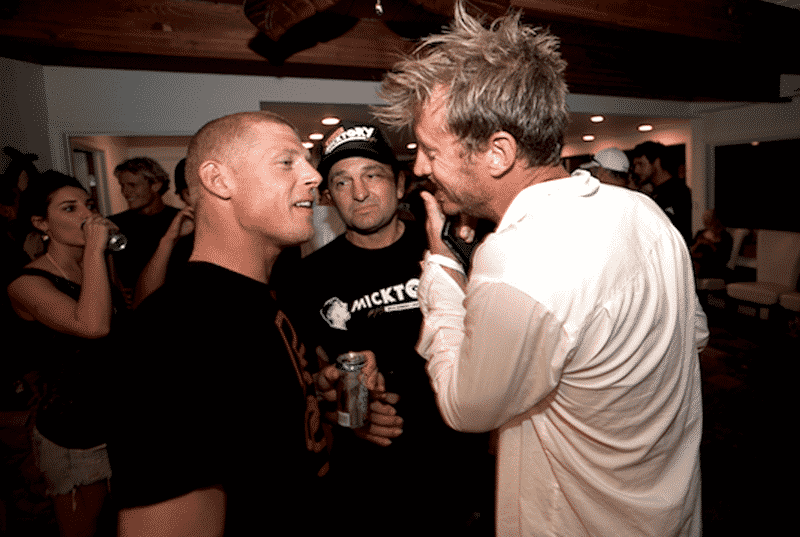 A fine look for any occasion.

Byron Bay's famed peace and love ethos threatened to come undone due growing animosity between leashless and leashed longboarders: "To the f*cking wanker riding his longboard without a leg rope at The Pass tonight..."